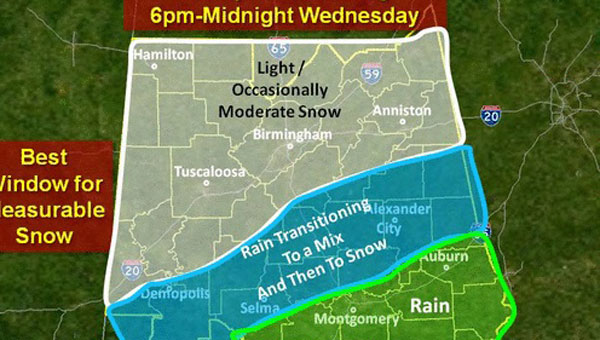 The National Weather Service at Birmingham has issued a hazardous weather outlook for Dallas and surrounding counties for snow across much of central Alabama, beginning as early as Wednesday afternoon in the northwest portion of the state, but extending into the evening.

Forecasters say most of the snow should be finished by sunrise Thursday morning.

The snow may mix with rain at time, but most of the hazard would come from the snow, forecasters say.

On Tuesday, it was expected the highest totals of snowfall would be across areas west of Interstate 65 and north of a Demopolis-to-Clanton line.

Beyond this system, more cold air is expected to move into the southeast, which could bring a hard freeze to portions of central Alabama Friday morning.