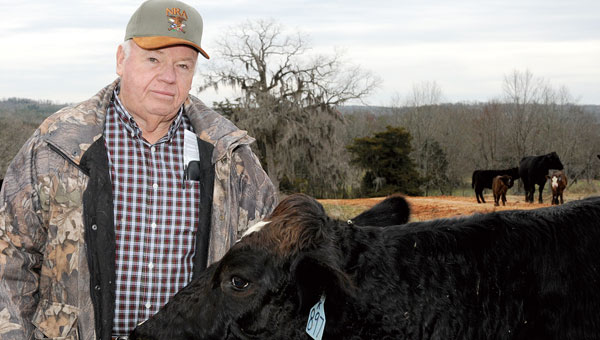 Harrell Watts was recently recognized by the American Simmental Association at the group’s convention in Denver. -- Chris Wasson

Harrell Watts was the first person with pureblooded Simmental cattle in Alabama.

Since then he has worked with the American Simmental Association, spreading the word about cattle. His work and dedication was recently rewarded when the association, at its recent convention in Denver, honored him.

Watts was awarded the prestigious Golden Book Award by the ASA on Jan. 15.

Watts runs Simmental Cattle of Alabama in Sardis along with his wife, Cheryl, who was the first to learn of his award.

“I already knew it before he did,” Cheryl said. “It used to be a big secret until the presentation, but they stopped doing that when one person didn’t show up. The award really came as a surprise. It wasn’t something that he went for, but he has done so much for the ASA.”

Watts said he had raised cattle all of his life, but didn’t begin working with Simmentals until the 1970s.

“The breed didn’t come into the states until 1968,” Cheryl said. “They started breeding them in 1970 and we brought in the first full-blooded, Albert Brohmly bull.”

That wasn’t Watts’s last experience in being first with the new breed either.

In 1994, Watts became the first person from the state serve on the board for the ASA.

The award has not slowed Watts down, and he still works to sell his cattle in Uniontown and Autaugaville.

“He’s made a light side of things, I think that is a big reason he has done so well,” Cheryl said.

MONTGOMERY — The new chairman of the Alabama Democratic Party is criticizing plans being developed by Republican legislative leaders to... read more