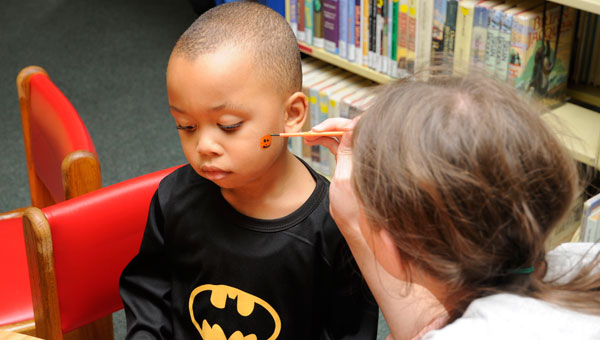 Cameron Ford, left, sits still as Elizabeth Wilson, right, paints a pumpkin on his cheek at the first stop of the Halloween Monster March Thursday. Children visited the Selma-Dallas County Library for face painting, trick-or-treated at businesses and participated in a costume contest. --Laura Fenton photo

On Halloween, Triton Sheffield can be whatever he desires.

“I can be anything on Halloween, like a dinosaur, dragon, sea animals and a bug,” Triton said.

Carrying an umbrella with bubble wrap tentacles, Triton was a jellyfish for the 23rd annual Halloween Monster March.

Children, ages zero through 12, were invited to the event, which paraded from the Selma-Dallas County Library and downtown businesses as employees passed out candy to all trick-or-treaters.

“We love to have this every year,” Kidd said.

After the March, children competed in a costume contest at the Larry D. Striplin Jr. Performing Arts Center.

Triton won the Kitty Windham award for the most original costume.

Kidd created the award three years ago after Windham died.

Continue with the process