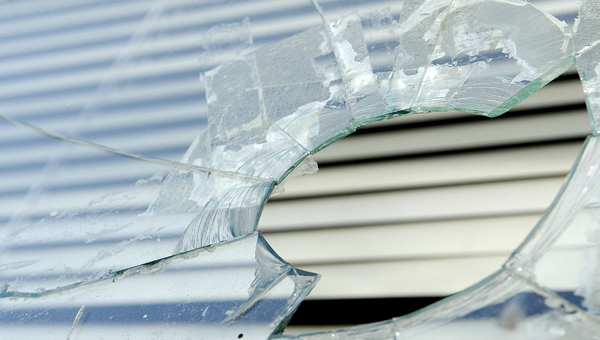 A window at Payne Elementary School in Selma is shattered after being struck with a bullet. Police are investigating the shooting that reportedly involved three teenage males shooting at another group of teenagers standing in front of the school. - Photo by Tim Reeves | The Selma Times-Journal

Teachers gathering together for an afternoon faculty meeting at Payne Elementary School Monday ran for cover as gunshots pierced at least three different rooms at the school. One of those rooms just happened to be the one used for the meeting.

Two individuals, one of which is pregnant, were transported to a local hospital following the shooting with what officials were claiming were not shooting-related medical conditions, although Selma Chief of Police William T. Riley said one of those transported may have had shattered glass hit their face.

“One of them was in the vicinity when the glass broke,” Riley said. “We do know that it looks like she may have ducked down and hit her head.”

The shots were reportedly fired around 3:35 p.m., according to investigators, and may have come from across the school from on Franklin Street near Philpot Avenue. Police said at least six shots were fired in the direction of the school, breaking three windows.

But, school and police officials said Monday evening that early investigation has shown that neither the school nor anyone in the school was the target of the shooting.

“Our early investigation has turned up that there were two individuals in front of the school that were apparently the targets,” Riley said. “Not only are we looking to find those who fired the shots, but we are also trying to find out the identities of those who were the targets of the shooting.

Two nearby residents, a grandfather and grandson, who wished to remain anonymous, saw the incident from their front yard.

The grandson, a fifth grade student at Payne, fell to the ground when he heard the shots.

“It scared me to death,” the grandfather said. “I came out in the yard and saw my grandkid lying on the ground. I thought they’d been shot.”

From the ground the grandson watched as one young person and two cohorts fired toward the school at two males. Only one gun was used, according to the grandson.

“He had [the gun] pointed at someone,” the grandson said.

“They were school kids,” the grandfather said. “They had backpacks, short pants and school clothes.”

Officers do not have an exact description of the suspects yet but will release this information once more is known.

“Our goal now is to try to identify who the shooters are, and also to identify the individuals that it was possible the shooters might have been shooting at,” Riley said. “Right now, the investigation is in the preliminary stages and we’re just trying to find out who was responsible.”

“We do want to let our parents understand that we’re going to do everything in our power to make sure our schools are safe,” Jefferson said. “We’ll have security on guard here 24/7 on guard if need be. We’re going to do whatever is necessary to ensure we have a quality academic setting as best we can.”