Devils win battle of the ‘villes 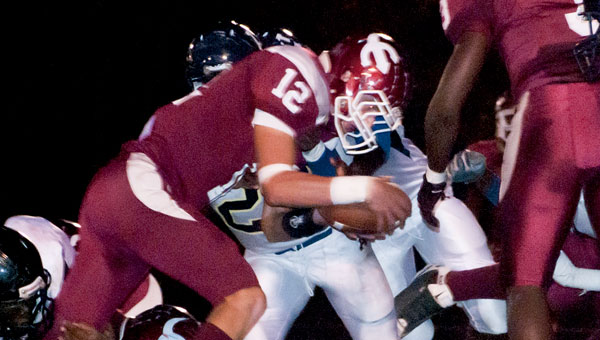 MAPLESVILLE — The Maplesville Red Devils dominated the Autaugaville Eagles Friday night, 54-19, to pick up their eighth straight win in as many games.

Red Devil Hunter McKay scored the first two touchdowns of the night on 44- and 5-yard runs.

Autaugaville answered in the second quarter with a 10-yard touchdown pass from London Maynard to DeMarcus Nixon.

Maplesville Quarterback Matt Hamner then connected with McKay, who sprinted down the home sideline for a 47-yard touchdown. But Hamner and Anthony Johnson had to top that with a 50-yard score. Then, on the Devils’ next possession, Hamner crossed the goal line on a short keeper.

With 15 seconds remaining in the half, Hamner passed to James Madsen from 25-yards out to make it 40-7 at halftime.

The third quarter saw more Devil domination as Hamner found Johnson again from the 15. Later, James Madsen recovered an Eagle fumble on a Maplesville punt — a feat he would accomplish twice Friday night. This put the Devils at Autaugaville’s 5-yard line.

Despite a short loss of yards, Madsen caught a pass from Hamner to take it in from the 8-yard line.

The Eagles took to the air again as Maynard completed a 22-yard touchdown pass to Quingerious Palmer. The duo struck again in the fourth quarter, this time for 26 yards, but failed to capitalize on the conversion.

“I thought the first half we executed about as well as we could,” said Maplesville coach Brent Hubbert. “I don’t know if we can play much better, but we need to stay at this level.”

Hamner completed 11 of 12 passes for a total 313 yards, with five touchdowns and one rushing touchdown.

McKay rushed for 122 yards and had 10 carries. Leading receivers were Madsen and Johnson with 84 and 95 yards, respectfully.