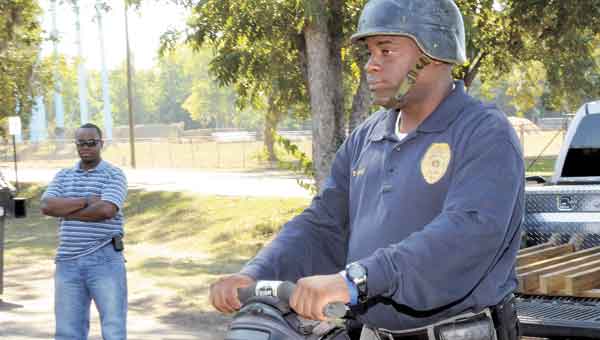 SELMA — Selma Police Officer Michael Hale was understandably nervous as he stepped up. He had never ridden any such thing; much less take the helm of one. But, Thursday, he took charge of one and, after just a few minutes of training, was just about an expert.

Hale and about a dozen other Selma Police Department personnel received initial training on the department’s new Segway unit, a piece of equipment designed to help officers patrol areas of the city and crowds not reachable through a patrol car.

“This is a key addition to our efforts to better patrol the areas of our city where we have people walking and enjoying the outdoors that we normally are not at,” Selma Chief of Police William T. Riley III said. “Getting this piece of equipment is thanks to a lot of work by a number of people and the support of the mayor and city council.”

The nearly $8,000 Segway was purchased through a grant program with the Strategic Alliance for Health of Dallas County, the Alabama Department of Public Health, Vaughn Community Health Services and the city of Selma.

“Our goal is to remove barriers that people say prevent them from exercising, eating healthy and living a healthy lifestyle,” said Kathi Needham, with Vaughn Community Health Services and Strategic Alliance for Health of Dallas County. “One of the things people said kept them from walking in areas such as the cemetery and Bloch Park was the perceived safety issues. By working with the police department to get this equipment we’ve eliminated that concern.”

Riley said residents could see officers patrolling with the Segway as early as this weekend during the Riverfront Market Day on Water Avenue.

Both Riley and Needham said equipment will not be sitting around unused.

“Part of the grant process was the department putting together a set of policies on how it will be used, when it will be used,” Needham said. “And we have to audit how these grant funds are used up to a year after the purchase.”

The city purchased just one Segway through the grant and matching funds, which was collected through discretionary funds from some council members and Mayor George Evans.

Riley said he has requested another unit in the new budget, but is unsure if the department would be able to purchase one.

The Segway, which is fitted with saddlebags, police shield and lights, can reach a speed of 12.5 miles per hour and holds a charge that should allow officers to patrol as many as 16 miles.