Julia Elizabeth Pons and Donald Claiborne Blanton were united in marriage on Friday, August twentieth at Five O’clock in the evening at the Private ocean front estate, Lanikuhonua on the island of Oahu. 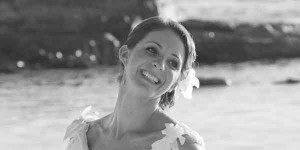 The bride is the daughter of Julia O’toole Pons and the Late Richard Gregory Pons of Arlington, Virginia.

The groom is the son of Donald Walter Blanton and Judy Boswell Blanton of Selma, Alabama.

Given in marriage by Brother Gregory Lawrence Pons, the bride wore an Ivory silk chiffon trumpet shape gown. The neckline was a tip of the shoulder v-neck and v-back gown embellished with whimsical chiffon flowers. The bride wore two cymbidium orchids in her hair.

She carried a bouquet of stargazer lilies, fragrant tuberose, pink ginger and pink ranunculus. Draped from the bouquet was a four strand fragrant pikake flower lei.

Kelley Dougherty Smith served as matron of honor. Meghan McCreary Dougherty served as maid of honor. Also attending were Margaret Blanton, sister of the groom, who resides in Washington, DC,

Nora Collins Abromavage & Sydney Olivia Pons of Arlington, Virginia were the flower girls and wore white dresses with a plumeria in their hair and the girls carried white loose orchids.

The wedding ceremony took place on the lawn of an exquisite oceanfront private estate rich with natural beauty and Hawaiian history. The aisle was covered with one thousand loose white orchids. Following the ceremony, the reception took place on the estate under a tent with tables of ivory and champagne colored linens along with centerpieces of muted tropical floral of pink ginger, pink and green tea leaves, tuberose and orchids. The bride’s brother in law, Michael Abromavage, designed and made the couple’s wedding cake cake which was a triple tiered hummingbird cake covered in pearly white fondant and decorated with bouquets of red ginger and pink stargazer lilies that was made by brides family friend, Miranda Atnip. Bride’s cousin, Collin Gillis of Marietta, Georgia was the master of ceremony for the couple’s wedding celebration.

Following a trip to The Four Seasons Manele bay on the Island of Lanai, Hawaii, the couple makes their home in Honolulu, Hawaii.

Tiffany Lynn Ellis and Phillip Stephen Hammond were united in marriage on August 21st at 1:30 pm at the Bear... read more