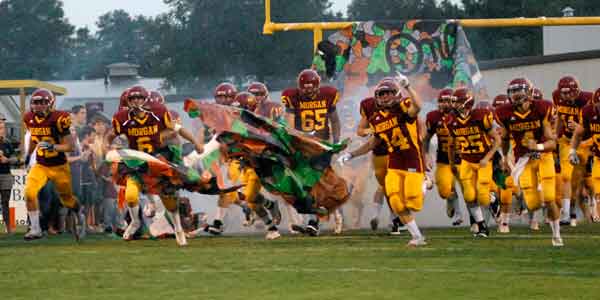 SELMA – Coming in to the region game with Morgan Academy, Prattville Christian Academy head coach Grey Powell wasn’t sure if one of his key players, J.J. Hudson, would be able to take the field. Hudson had suffered a separated shoulder in last week’s win against Kingwood, but Hudson fought through the injury and rushed for 103 yards in the fourth quarter, and added a momentum changing 53-yard kickoff return for a touchdown as the Panthers (3-0, 2-0) edged the Senators, 16-6.

“This was the biggest win in PCA history,” said Powell as he stared at Morgan’s scoreboard, which lists all of the Senators’ state football championships. “Before last year we were 3-27. The only tradition we had wasn’t a good one.”

The story for Morgan was one of missed opportunities — on offense and on defense. The Panthers struck first after Morgan killed a punt at the Prattville 1-yard line halfway through the first quarter. But on third and long, the Panthers converted, then drove down to the Morgan 5-yard line before Morgan linebacker McCain Levins notched a sack and forced a Panther field goal.

Morgan fought back after Jody Glover picked off a wounded duck pass and set the Senators up in Prattville territory. The Senators capitalized on the turnover when quarterback Austin Smitherman tossed a pass that was tipped by a defender, but caught by Austin Anderson for a Morgan touchdown. Levins’ PAT was no good and the Senators led 6-3, but it would be short-lived.

On the ensuing kickoff, Hudson broke toward the middle, then turned and sprinted down the right sidelines breaking tackles along the way for a 53-yard touchdown. The point after gave the Panthers a lead they never relinquished.

“Anytime the ball is in J.J’s hands you’re a breath away from something great,” Powell said.

Morgan’s best opportunity to put points up late in the game came on fourth down and long when Smitherman faded back to pass, saw his receivers covered and scrambled, coming up only inches short of a first down deep in Prattville territory. Hudson later iced the game for the Panthers with a 60-yard sprint around left end after taking a direct snap from the center.

“We played solid defense and created a lot of turnovers with our defensive backs, but we let two or three big plays go,” said Morgan head coach Brian King. “We ran like a well-oiled machine last week and this week we just didn’t execute well. We had the ball inside their 5-yard line three times and couldn’t put it in because of mental errors. But we’ve got something to build on; we just need to work harder as a team.”