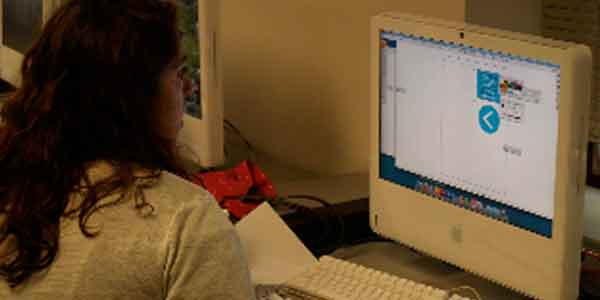 A student prepares the website for the program.--Courtesy photo

TUSCALOOSA — This buzz has everything to do with not drinking.

The LessThanUThink campaign, an student-led anti-binge drinking campaign at The University of Alabama set to launch Sept. 2, will take an innovative approach to creating awareness of binge drinking.

“Our campaign really focuses on the aspect of you don’t want to make a fool of yourself by drinking too much,” said Amanda Coppock, media relations coordinator for the campaign.

Binge drinking is the consumption of four or five alcoholic drinks in two hours at least once in the past two weeks, which is less than people might think would categorize someone as a binge drinker.

Posters and information have catchy phrases such as “You thought you could dance, and you could… three drinks ago.”

Messages are meant to inform, but not point at students and tell them what not to do.

“We found, in our research, that college students are not receptive to that,” Coppock said. “They are going to block out a message of don’t drink, you’re going to hurt yourself or hurt others. They’re more concerned with their reputation and the weight-gaining aspect of it and their appearance.”

Of those contacted for focus groups, interviews or students surveyed, 7 percent correctly identified with the definition of binge drinking, 69 percent find humorous advertising to be the most appealing, 54 percent have done something they regret while over-consuming alcohol and 53 percent find scare tactics unappealing and ineffective.

Megan Miller, senior public relations major at Alabama and a Meadowview Christian School 2006 graduate, is one of the students on the event planning committee of the campaign.

She joined because she has seen the effects of drinking excessively on weekends in Tuscaloosa.

“I have gone out some, and of course, when going out, I see those people that are just three-sheets-to-the-wind and have no idea what they are doing,” Miller said. “I see how they embarrass themselves.”

Students will hold campaign events at a local bar, display posters around campus and even hold an alcohol-free zone tailgate at an Alabama football game.

At each event, students will pass out promotional items and inform listeners of the effects of binge drinking, in relation to their appearance to peers.

The students of the ad team in the College of Communications and Information Sciences created and submitted the project to the 2009 American Advertising Federation National Student Advertising Competition.

The project placed second in the competition and was awarded a $75,000 grant from the Century Council to implement the campaign during the following school year. None of the students from the 2009 ad team are a part of the campaign this year.

The Century Council is an organization of distillers, which fight to eliminate drunk driving and underage drinking by promoting making responsible choices regarding alcohol.

In order to use the grant, students had to present the campaign to a “client,” in this case the Student Heath Department Center Department of Health and Wellness Promotion on the university’s campus, who choose which aspects of the campaign they would like the “agency,” or students, to conduct.

“They came to us because they know we are the place on campus whose sole role is to provide prevention education and activities resources for those issues known to be of concerns to college students,” said Margaret Garner, director of the department.

Delynne Wilcox, assistant director of health planning and prevention, said the angle of the campaign is the most creative she has seen.

Once the campaign ends in mid-October, students will analyze data collected from traffic to the campaign website and may also pass out surveys to students. All data will be sent to the Century Council to provide information of the ways students used the grant.

The Century Council may then choose to implement some of the grant programs on college campuses nationwide.

Money can be allocated to program on-campus, at local bars, or costs related to testing, personnel and evaluations.