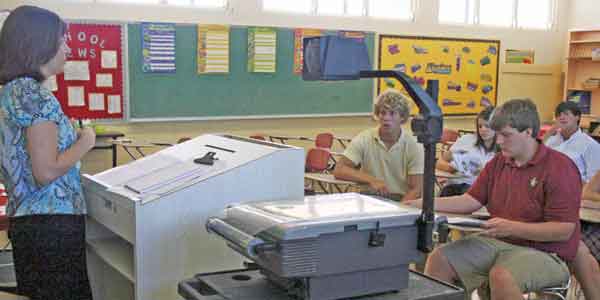 SELMA — Both mother and daughter walked anxiously onto John T. Morgan Academy’s campus Wednesday for the first day of school.

Whitney Holladay, first-year high school math teacher and Morgan parent, left her daughter at the first grade classroom and crossed campus to the high school rooms, her tension easing as she entered her classroom.

“I’m in a unique situation because I am a first-year Morgan parent,” Holladay said. “It’s been really neat to see [Morgan] from a parent’s perspective and from a faculty’s perspective. It’s just very well-run, very together.”

“Every chance they get, they are pulling their new textbooks out,” Pomeroy said. “We hope they’re still like that in January.”

Student Jody Glover is most ready for his senior privileges, which include eating lunch off-campus once a month, an early lunch period and leaving five minutes early at the end of the day.

Glover has attended Morgan since first grade. This year he is one of 41 seniors.

“I could not have asked for a better day,” Skipper said. “Of course, that has been because we have a great faculty and staff. They make it easy.”

Skipper would like to achieve the President’s Award again this year. The designation is the state’s highest academic award for the school’s exceptional educational programs in math, science, writing and the arts. The school has claimed the award for 18 years.

Morgan has 500 students in grades from kindergarten through high school.