A way to develop the Black Belt 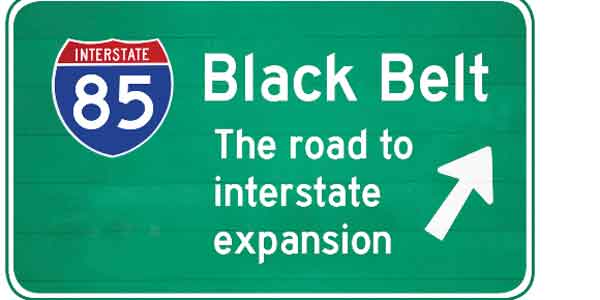 SELMA — Nobody can quite pinpoint when the idea of an extension of Interstate 85 from Montgomery to the Mississippi state line germinated, but sometime along the same time the nation celebrated the 50th anniversary of the national interstate system, and officials in Alabama began to get serious about the project.

Dallas County Probate Judge Kim Ballard was a part of the early planning process, but cannot remember where the idea was born.

“I don’t know who caused it to happen,” he said.

Wayne Vardaman, president of the Centre for Commerce and executive director of the Selma-Dallas County Economic Development Agency, said he remembers some discussion of the project about eight years ago after he took his current position.

“We had focus groups,” he said. “Certain folks got together and were asked what were the pros and cons. It drug on out and we sent through that stage.”

But those here agree, nothing began in earnest on the project until 2005.

In 2005-06, the nation celebrated 50 years of the interstate system, one of Dwight Eisenhower’s top priorities upon becoming president. He raised the issue in 1954, and Congress passed the Federal Aid Highway Act of 1954, which authorized $175 million for an interstate system distributed on a 60-40 federal-state basis. In 1956 Congress produced legislation that called for 90 percent federal funding, with money coming from a Highway Trust Fund that received the revenue from the federal gasoline tax. The Federal-Aid Highway Act of 1956 was signed June 29, 1956.

Interstate 85 from Alabama to Virginia was included in that act, for a total of 668.75 miles, according to “The Dwight D. Eisenhower National System of Interstate and Defense Highways.”

The route extends from Montgomery to Petersburg, Va. Through the years, various projects have seen the interstate widened or bypasses built off the main thoroughfare.

In 2005, near the 50th anniversary of the nation’s interstate system, Congress considered the Safe, Accountable, Flexible, Efficient Transportation Equity Act: A Legacy for Users. This measure under the George Bush administration authorized federal public transit programs through September 2009.

Sen. Richard Shelby of Alabama realized without access to infrastructure that has allowed the rest of the state to enjoy significant economic development, the Black Belt region has not yet met its economic potential.

The U.S. Census Bureau describes the Black Belt as primarily agricultural with low-density settlement and high unemployment. The region’s population is 575,783, or about 13 percent of the state’s total, according to the 2007 census update. Of that population 52.24 percent are African-American, 45.87 percent are white and other races make up the remainder of the population.

“Sen. Shelby believes that the I-85 extension is a critical investment in the Black Belt’s infrastructure, which, combined with the revitalization projects that local communities have undertaken, will spur new growth opportunities for the citizens of the Black Belt,” said Pamela Simpson, deputy press secretary for the senator.

In 2005 Shelby secured $100 million to allow the state to begin planning, engineering, design and construction of the I-85 extension. This appropriation was included in the SAFETEALU, which authorized federal public transit programs through September 2009.

“Sen. Shelby’s $100 million allocation was intended to get the project started so that the state could then build it out,” Simpson said.

In June 2005 Gov. Bob Riley added $16 million in state funds and directed the Alabama Department of Transportation to expedite the I-85 Extension study process. Two months later, Congress approved SAFETEALU, and the $100 million sought by Shelby.

Shortly after SAFETEALU was signed into law by Bush, ALDOT contracted with Volkert and Associates to complete a corridor study and prepare an environment impact statement to construct a multi-lane, limited access freeway to connect I-85 in Montgomery and I59/20 near the Mississippi state line.

The corridor study determines the type and location of improvement needed for roads and highways, in this case, and to assess potential impacts to the environment . The I-85 extension corridor study includes large sections of six Black Belt counties, including Dallas, Hale, Lowndes, Marengo, Perry and Sumter with some in Autauga and Montgomery counties. The study area encompasses an estimated area of 2,433 square miles, both rural and urban.

Instead of a question-and-answer session, the public hearings consisted of area residents pouring over aerial maps spread out on several large tables at the Carl C. Morgan Convention Center in Selma, at a series of public meetings in Lowndes County and at the Demopolis Civic Center in Marengo County, among others.

Those who attended the meeting saw two routes for the proposed extension: The preferred route, which runs south of Selma from Montgomery, turns north of Uniontown and drops back south of Demopolis, headed west to end just north of Cuba at I-59/20 and a northern route through Autauga County into Dallas County slightly north of Selma, onward to Bogue Chitto Creek and then identical to the preferred route.

Representatives of Volkert have said ultimately ALDOT and the Federal Highway administration will make the final decision of the route, but Volkert will make a recommendation on the preferred route.

Volkert explained the reason for its choice of the preferred route in the draft of its environmental impact study, available on its website at www.i85extension.com/DEIS.htm. The study points out each considered segment of the proposed interstate was analyzed on a point system, ranging from 90 to 96 points. The preferred alternative received 95 points.

Another reason the segment to the north of Selma is not viable is the impact an interstate would have on the Selma-to-Montgomery National Historic Trail, which begins at Brown Chapel in Selma and ends at the capitol in Montgomery. The preferred alternative would avoid effects on the trail.

“The proposed route will do wonders for Selma and Dallas County and my great-grandchildren,” said Ballard. “It comes within a mile of Craig Park and South Dallas Park.”

Those are industrial parks with viable industries already in them. If the interstate is built on the south side of Selma, there will be a good deal of growth officials agree.

But local official also realize the retail growth the county and Selma could see if I-85’s route took it toward the north. The exits on the preferred route are too far away for Selma to see much retail growth. Hotels and restaurants couldn’t enjoy the benefits of interstate traffic with the interchange six miles from the city.

“If we can get an exit closer to Selma, it would be great,” Ballard said. “Any way you measure it, its six miles plus. There’s just no opportunity for retail development.”

There are reasons for the route to the south, instead of the north of Selma, according to David Webber, and engineer with Volkert.

Additionally, said Webber, fewer homes will be disturbed by the southern route around Selma and on through to Demopolis. “Most of this land is farmland,” he said. “Fewer houses, structures are in this preferred alternative.”

Ballard and others say they doubt they will be alive when the extension comes into fruition. The $100 million provided for purchase of right-of-way, but this interstate will cost close to $2 billion to construct from end-to-end.

There is no federal money to pay for the construction, and the likelihood of more federal dollars soon is questionable. About a year ago, Shelby told a group of business and political leaders at a breakfast he didn’t see any federal construction dollars in the future.

His deputy press secretary explained, “Large highway projects, such as this one, are never fully funded from direct congressional appropriations, but, instead, rely on state formula dollars. There are no constraints preventing ALDOT from dedicating a portion of the $650 million-plus it receives annually from the Federal Highway Trust Fund to this project.”

Not too many weeks ago, residents of the Black Belt had the opportunity to see plans for the proposed Interstate... read more