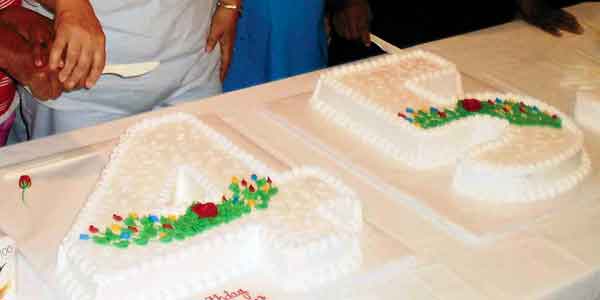 Attendants cut birthday cakes at the opening reception for the 45th anniversary of the Voting Rights Act of 1965. --Laura Fenton photo

Every birthday deserves a birthday song and cake — especially the birthday of the 45th anniversary of the passage of the Voting Rights Act of 1965.

So when the crowd inside the National Voting Rights Museum and Institute sang and cut two cakes at the opening reception, it fit the occasion.

Carol Zippert, founder of the Black Belt Community Foundation, enjoyed the birthday celebration because it reminds her of the festivities she holds for 18th birthdays.

She makes a large celebration of 18-year-old birthdays of family and friends because she remembers the struggle and protesting of the 1960s.

But most important birthday, according to Zippert, is the when a person turns 18 and registers to vote because it is a lasting testament to the efforts of her generation.

Celebrating the milestone was not just for the generation of the 1960s. Youths attended to the event to thank those who protested.

“I’m here to show respect to the past and the people who marched and protested,” said Benjamin Smith. “This is in memory of them and shows respect. I’m here, I believe in what you did and I’m grateful for what you did.”

The Voting Rights Act of 1965 outlawed the discriminatory voting practices.

Register and use that vote

More than 45 years ago, then-President Lyndon Baines Johnson signed into law the Voting Rights Act. Until then, some states... read more