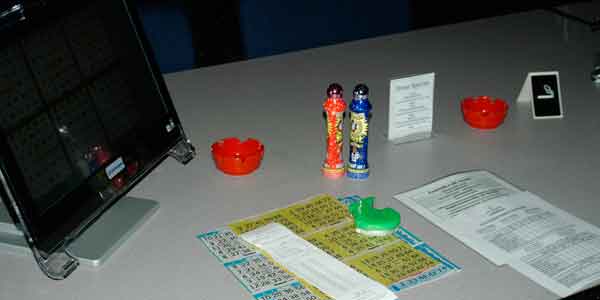 WHITE HALL — Scores of people filed into the new Lowndes County casino to try their hand at a somewhat traditional, yet high tech game of bingo.

The Southern Star Entertainment Center  opened its doors to the public Thursday, and in spite of the rain, people broke from their traditional routines of commuting to Atmore to enjoy the new facility.

Dave Haigler of Elmore County said he drove all the way from home to enjoy a game of bingo.

“I saw the grand opening when I opened the newspaper this morning and wanted to be the first one here,” said Haigler. “I love bingo and go to Atmore all the time to play.”

Haigler said he enjoys all types of games outside of bingo and mentioned he would commute to Southern Star more often if the casino offered a larger variety of games to play.

Bingo cards and interactive tabletop computer bingo machines work hand in hand, depending on the player’s preference of various versions of bingo.

“It’s just like traditional bingo,” said WHEAT General Manger Leslie Clark. “If a person gets a bingo, they still have to raise their hand and call it out.”

WHEAT is a charity organization that owns the Southern Star entertainment center.

When a player purchases a pack of bingo cards, or games, they can play on paper or the tabletop computer.

As the numbers are called out by the announcer, wall-mounted number boards will light up with that number.

“The computer tells the player how many numbers they are away from a bingo,” added Clark. “This is what  separates our games from those deemed illegal by Gov.Bob Riley’s task force.”

The initial intent of the casino was to implement electronic bingo, but “backed off” to see what would happen after other casinos were raided, according to Clark.

Matthew Crenshaw of Selma said he “loves bingo and has played all over the nation.”

“I play the dogs, horses and pretty much everything,” said Crenshaw. “I plan to visit here regularly.”

Southern Star employs about 25 people at the casino, but Clark has high expectations that if they were able to implement electronic bingo, the facility could see up to 115 jobs in the first phase.

All of the proceeds from the games go to White Hall Enrichment Advancement Team (WHEAT), according to Clark.

“After the lease, all the money goes to the charity,” said Clark. “We rent this building from a developer and pay them a lease.”