Youths protest for permission to dance 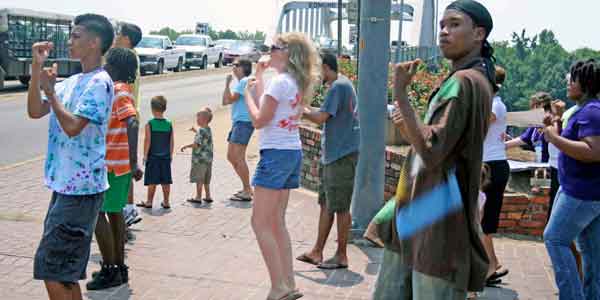 Austin Williams (from the left), Amanda Farnsworth, Patrick Woods and other local youths protest and perform Wednesday at the foot of the Edmund Pettus Bridge and Water Avenue. The youths will not be allowed to dance on the bridge during the voting rights weekend, but will protest Friday at City Hall and march along Broad Street to Memorial Park where they will perform the dance routine.--Laura Fenton photo

SELMA – Members of “Project Dance,” a group with ties to the Freedom Foundation, wanted to perform a routine on the Edmund Pettus Bridge as part of the voting rights celebration Friday hosted by the Southern Christian Leadership Conference Selma-Dallas County chapter and National Voting Rights Museum and Institute, but the city of Selma would not grant them permission.

Mayor George Evans said the bridge will close from 6:30 p.m. until 7:30 p.m. for choirs to perform and officials to make speeches, but he will not allow the organized dance.

Organizers of the dance say they will gather at City Hall at noon Friday to protest the city’s decision not to allow the dance on the bridge and march east along Broad Street to Memorial Park on the east side of the bridge, where they will perform their choreographed routine.

The group believes dancing on the bridge is a metaphor for unifying the youth of Selma.

“We want to dance on the bridge because we, and the youth of Selma, want to show that this bridge is a positive and we want to see the city of Selma change,” said Samantha Gomez, co-organizer. “It’s going to be the youth that are going to make the change.”

Organizers said that through the public display, they want to set an example for the rest of the community.

“We feel like it’s time for the youth and the adults from both sides of Selma to come together and to unite,” said Jarvis Cleveland, co-organizer. “That’s what we’re dancing for.”

Hoping to change the decision of officials, the youth protested Wednesday on the sidewalks at the foot of the bridge and Water Avenue. Participants chanted “we will dance,” performed a routine on the sidewalk and passed fliers of the weekend’s events to drivers stopped at the intersection’s traffic signal.

“The protest is to ask the mayor for the dance to happen,” said Amanda Farnsworth. “It’s four minutes long. It’s just a dance, it’s not anything else.”

Selma stores are prepared for the back-to-school onslaught. Now it’s up to the rest of us this weekend to support... read more