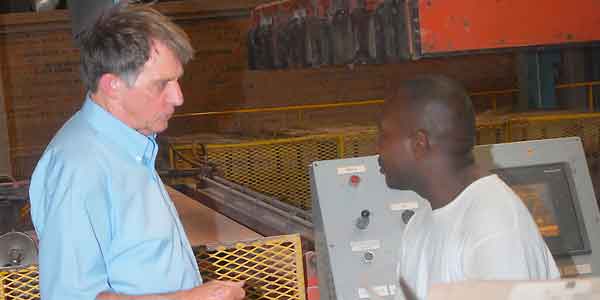 As a little boy Ted Henry was convinced he would follow in his father’s footsteps and become a brick maker. Growing up in 1940s Selma he would stand at the back door of the brick plant, throwing rocks into a pond that has since been filled in to make room for expansion, and dream about running his dad’s company. As it turns out, his youthful imagination was right on the mark.

Saturday marked Henry’s last day running day-to-day operations of Henry Brick Company, a career that spans 50 years and one where he helped move the company from manufacturing 26 million brick in 1961, the year he officially began work, to its peak year of production in 2006 when the company made 116 million brick. It marks another milestone in the company’s history, one that began with a proposal and then a promise.

Ted Henry’s dad, John Davis “JD” Henry, was born in Pleasant Hill in 1911. The son of a farmer he decided that the farm life was not something he had great interest in, so at an early age he bought a log truck and started a small saw mill. As time passed and he saved enough money he bought another truck and hired a driver.

“When he made a little money, he and some other guys bought a little airplane,” Ted Henry said. “Two guys he ended up flying with owned a brick company. He told me one day when they were at the airport he made the comment ‘It looks like what ya’ll are doing is a lot easier than what I’m doing. I’m driving all over Central Alabama trying to buy enough stuffage to keep the sawmill running and ya’ll just dig it out of a hole behind the brick company. Why don’t ya’ll sell me your brick plant?”

As the story goes, Ted said his dad continued to suggest they sell him the brick plant until one day he finally told them “If you don’t sell me your brick plant I’m going to build one and run you out of business.” They didn’t sell, so in 1945 JD Henry started Henry Brick Company at the location the brick plant currently sits on. And true to his word the next year he bought the Selma Brick and Tile Company, which he continued to operate until 1958 when he closed it, leaving Henry Brick Company as the only brick manufacturer in Selma.

The Torch is Passed

By the early 60s Henry Brick Company was one of about 12 brick companies in Alabama and JD Henry began talking to Ted about joining him to run the company. At that time Ted, having grown up in the Presbyterian Church, decided to attend Davidson College. At the time Davidson was a small men’s college with about 800 students in North Carolina. Given his deep spiritual base, it was a place where felt comfortable.

“When I came home first summer break, dad was trying to talk me in to going into the brick business, Henry said. “When I went back to Davidson I wasn’t sure what I wanted to do. I came home for Christmas break (and) I had some conversations with dad about it. When I went back to Davidson, I put down the pros and cons and what it boiled down to was I loved Davidson, was a huge Alabama football fan but had never considered going there. What I decided was if I went there and didn’t like it, I could come back to Davidson.

Henry transferred to the University of Alabama and majored in industrial management. He also began to call on contractors and clients of Henry Brick Company in Tuscaloosa a few days a week while taking college courses. Eventually he had to fulfill his military obligation, something that was required at the time. As he prepared to enter the military, fate intervened when, at age 48, JD Henry suffered a heart attack.

“It was decided that I needed to defer from going into the Army for six months while dad recovered from his heart attack,” Ted Henry said. “At an early age I was given a lot more responsibility than I was probably able to handle. I’m sure there were times when some people came in, sat down at the desk and there was ‘Mr. Henry,’ and they said ‘who is this kid?’ But it gave me an opportunity to step up. As a result of that I got really into the brick business. If I’d not had that experience and had gone off in the Army… I might have done something different. It turned out dad’s heart attack kind of gave me trial by fire.”

JD Henry eventually recovered; Ted fulfilled his military obligation and returned to work with his dad in 1961.

“When I went in the Army I was already hooked on the brick business and couldn’t wait to get back,” Henry said. “By then dad had recovered and we wound up having 12 years together. He died in ’73, so it was neat we had the time together to enjoy each other and enjoy the business.”

Putting the ‘Family’ in Family Business

As time passed, Ted’s sister Rosemary married and her husband, Art Gleason, joined Henry Brick as President while Ted served as chairman and CEO. Construction of a second plant began in 1972 and by 1988 the company was producing 70 million brick per year. Plant 2 was expanded in 1995 and by 1996 the company was making 100 million brick per year, which it did for 11 straight years.

Elton Birch, who joined the company in 1990 worked for Ted and Art and remembers the strong relationship the two had and how they approached guiding the company.

“I’m sure they always didn’t agree, but they never disagreed outside the privacy of their offices,” Birch said. “Art being married to Ted’s sister, and a stockholder, created a little different situation. They counted on each other for their contributions to the company.”

John Sherrer, who retired from Henry Brick Company in 2002 after 29 years with the company, recalls Ted and Art “making a very good team.”

By 2005 family involvement in the company had grown with two of Ted’s sons, Davis and Denson working at the company and two of Rosemary’s sons-in-law, Jim Cothran and John Hanning also holding management positions there. The following year tragedy struck the company when Gleason passed away. Although Gleason had retired the prior year, his death rocked the company to its core.

“I know that Ted certainly missed Art and probably had to work a little harder since he didn’t have that support and input from Art,” Sherrer said. “Ted Henry certainly educated himself to be qualified to run Henry Brick. He knew how to meet people well and certainly was a hard worker. He was trained well by his dad.”

In 2008 Ted Henry began to seriously contemplate retirement, but he became troubled by what he saw with the national economy. Henry Brick had made it through slowdowns in the housing market in the past by reducing production to only one plant, but with the economic hardships and retirement on his mind, he brought the family together.

“I told them I think the ‘storm clouds are gathering,’ as Churchill said about the war, and we need to rally around here and figure out what we’re going to do,” he told them.

It was then Henry sought the help of an outside consultant; somebody who could help shepherd the company through the tough economic times, but also someone who could help craft a transition plan that would prepare the company for Ted’s retirement from day-to-day operation and a transfer of management to the next generation, one that Ted refers to as “G3.”

“We needed a consultant to help us plan for the transition of my retirement when Jimmy, John, Davis and Denson would become the third generation to direct the efforts of Henry Brick Company,” Ted said. “He has spent a lot of hours with the four of them to help them develop their ideas for the future of HBC and to coordinate their efforts.”

Rex Meade, who is a clinical psychologist and strategic planner, worked with the company to develop the transition plan.

“Tremendous credit should be given to Ted and by extension his sister Rosemary, for engaging in a pretty intensive and lengthy process,” Meade said. “It was a process to evolve over 18 months; a very disciplined process to not only select the next president, but also the roles of the others. They have an extremely complimentary leadership team. As Ted moves on and his and Rosemary’s generation move on, those four horses need to pick the wagon up and move it on.”

Meade said as he worked the succession plan he was accepted immediately and considered himself a “surrogate” family member and ultimately a plan fell in to place.

Meade said he presented his recommendation to Ted and Rosemary, who accepted the plan. Their acceptance of Meade’s recommendation sets the stage for the torch to be passed to the next generation, something Davis Henry says will be challenging but achievable with the help of the other members of “G3.”

“Right now the brick business is terrible, but we’ve got a neat opportunity to hopefully leave our own legacy on Henry Brick like dad and Art did,” Davis said. “They were hugely successful and I hope the third generation can be as successful and hope we can do for our employees what dad and Art did for theirs.”

While Davis Henry will be the new president of Henry Brick, he said he sees himself as more of a facilitator for “G3” than that of a boss.

The Next Chapter Begins

Although Ted Henry is officially retired, he will still maintain an office at Henry Brick, just not the one he’s guided the company from in decades past. He will remain Chairman of the Board, but will take on an advisory role to the next generation as they work to find their pace. He plans to take the month of August off and travel with his wife, Debe.

“I love Selma and wouldn’t want to be any place else,” he said. “I’ve enjoyed being a part of making and selling something that is a good product. As we all know the biggest investment people make is their home so if you can make them good brick they like for a good amount; it’s fun being part of that.”

Henry’s approach to his retirement is similar to his approach to running Henry Brick. He looks ahead instead of looking to the past and offered some advice to the next generation of brick makers.

“Whatever you do, one of the most important things is your attitude. You can’t do anything about what the other person does, but if you have a good attitude about what you’re involved in you can overcome difficulties.”

He also said “The most important thing you can do is show up. And if you show up with a good attitude you can do a lot of things.”

Davis Henry knows the next chapter in his dad’s life will create some unique opportunities for everyone, but he’s glad his dad will still be involved in the company.

“He’s truly going to be a mentor for us and be there for us when we need him,” Davis said. “And gosh, with his experience and this time in the brick business he’s going to be needed. That’s a neat backstop to have. You’ve got someone there who’s ‘been there and done it.’ That’s going to be an interesting dynamic.”

Dear editor, I have read with interest Senator Hank Sanders’ recent open letters to the president, regarding the recent flap... read more