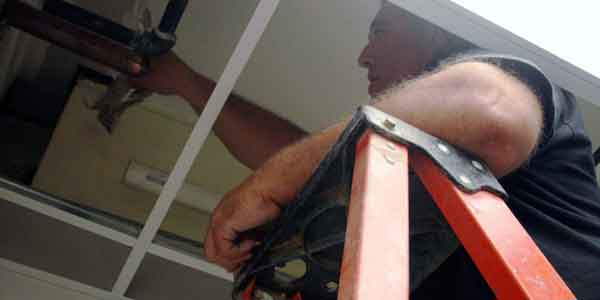 Larry Burge attaches a pump for the elevator shaft on the first floor of First Baptist Church. The church staff expects the renovations to be completed by the end of the year.--Laura Fenton photo

After 86 years, it’s time for renovations.

Contractors have completed nearly 70 percent of First Baptist Church’s planned changes to the entire interior of the educational building.

“The person that walked out of there a year a half ago from their classroom, they’re not going to know it when they go back in there,” said the Rev. Jerry Light, pastor of the church. “They reconfigured everything.”

But from the outside, the building will look the same.

“They maintained the historical integrity of the outside of it, yet they made it functional on the inside for a 21st century church,” Light said.

The first floor will serve as a space for adults with a seating area, classroom and kitchen for the men’s group to make breakfast every Sunday morning.

Upstairs will be designated for teens and young adults. There will be a large room with a stage for concerts or rallies, a café and seating area for fellowship before and after events, and classrooms for small group discussions.

All $1.3 million for the project came from donations from members of the church.

Because the congregation fully funds the renovations, their opinions were considered when designing the space. Members filled out surveys listing what the new space needed. Architects used these opinions to create the building plans.

Volunteers from the church membership offered their expertise to the project, which helped to reduce labor costs.

Driggers spent 33 years working as the director of planning and development for the City of Selma, and now four years into retirement, refreshes her skills with planning the space at the church.

The interior will have neutral colored walls so space will be versatile for occasions and long-term use, Driggers said.

“It can be a flexible-use space if things change down the road,” Driggers said.

As for decorations, Driggers and the interior committee will make final decisions for the space closer to the completion of the renovations.

Driggers would like to see few decorations on walls so the areas can be functional on many different levels, but she does not know what the committee will decide.

The two-story space will have 13,000 square feet and should be completed by October. The project is led by Cooper Brothers Construction.

Comments? Where are the comments?

A lot of you have called, pulled us aside or e-mailed to ask about the comments. On this platform, WordPress,... read more