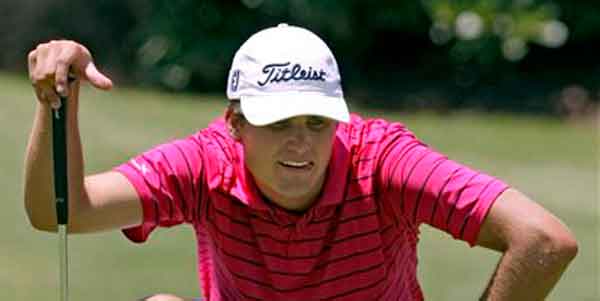 Bobby Wyatt lines up a putt on the 18th green during the second round in the Alabama Golf Association's State Boys Junior Championship at the Country Club of Mobile, Wednesday, July 28 in Mobile. Wyatt shot a 57 for the round.--The Associated Press

MOBILE — An Alabama signee has likely set a world record as the lowest score in competitive play on a golf course of more than 6,500 yards, which the Guinness Book of World Records uses as the standard.
Bobby Wyatt of Mobile shot a 14-under round of 57 in the second round of the 65th Boys State Junior Championship on Wednesday.
A search through the Internet shows Homero Blancas shot a 55 in the 1962 Premier Invitational in Longview Texas as an amateur. Blancas went on to play on the PGA Tour in the 1960s and 70s. His round was 15-under on a par 70, which was a little more than 5,000 yards and played over the same nine holes twice.
In the history of professional golf, a score of 58 marks the lowest. University of Alabama alumni Jason Bohn scored 58 in the 2001 Canadian Tour’s Tour Championship, as did  Shigeki Maruyama in the final qualifying for the 2000 U.S. OOpen and Ryo Ishikawa earlier this year in the Crowns tournament on the Japanese Tour.
“It was unbelievable,” Wyatt said in a prepared release from the Alabama Golf Association. “I got off to a fast start with birdies on my first two holes, then was three-under after four and it kept going from there.”
To view his scorecard, go here.

Auburn football player Zac Etheridge talks to the media about his healed neck injury and his return to NCAA college... read more