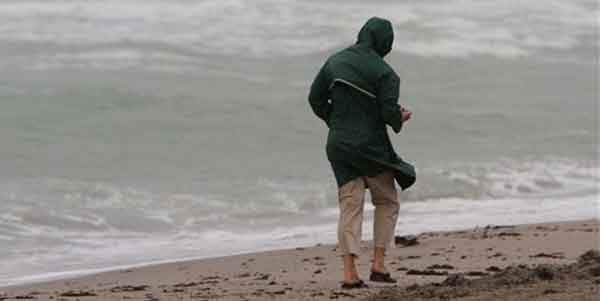 Magva Balbuena walks on the Hollywood beach Friday, July 23, 2010 looking for a "lucky sea bean" she says are considered lucky in Cuba, where she is from. Rain is expected as Bonnie has dissipated into a low off the coast of Louisiana.--AP Photo/The Miami Herald, Walter Michot

Bonnie has degenerated into a disorganized area of low pressure in the Gulf of Mexico.

Forecasters at the National Hurricane Center say the storm is not expected to strengthen as it heads to the northern Gulf of Mexico toward Louisiana. Maximum sustained winds are 30 mph.

As a result, there are no coastal watches or warnings in effect.

The storm front is moving toward the west northwest near 14 mph. The low is expected to dissipate tonight or Sunday.

Forecasters say the front is expected to produce total rainfall accumulations of 1-2 inches over portions of southern Louisiana, southern Alabama and the far western Florida panhandle with possible isolated maximum amounts of 3 inches.