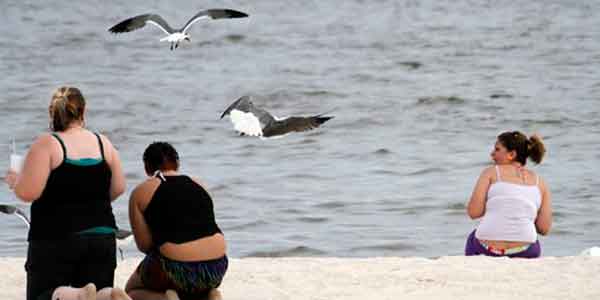 Kierstyn Talley of Ocean Springs, Miss., screams as sea gulls approach her seeking food, while her sister and a friend, left, look on Friday, July 23, 2010 at the Ocean Springs Front Beach. The young women wanted to enjoy the sun, the cool waters and play in the sand before the rains of Tropical Depression Bonnie hit the Gulf Coast, but the sea gulls, ever beggars, flew around them looking for food for several minutes.--AP Photo/Rogelio V. Solis

BELLE CHASSE, La. — Bonnie was downgraded to a depression Friday, but still packed enough kick to prompt emergency declarations along Louisiana’s coast and make officials begin the tedious preparation for tropical storm-force wind and rain bearing down on the shore.

Louisiana Gov. Bobby Jindal told reporters at a news conference in Plaquemines Parish coastal parishes and some as far inland as East Baton Rouge Parish have issued emergency declarations that allow local governments to take actions, such as arranging for debris removal or stockpiling supplies.

Plaquemines and Lafource parishes have called for voluntary evacuations of low-lying areas.

At 7 p.m. local time, Friday, the center of Bonnie emerged into the eastern Gulf of Mexico moving toward the west-northwest near 17 mph.

Forecasters expect this general track with a decrease in forward speed for the next two days. Bonnie is expected to cross the eastern Gulf of Mexico tonight and Saturday and reach the northern Gulf Coast late Saturday.

Earlier this week a group of people hosted a reception for state Sen. Hank Sanders. Most everybody knows Sanders. They... read more