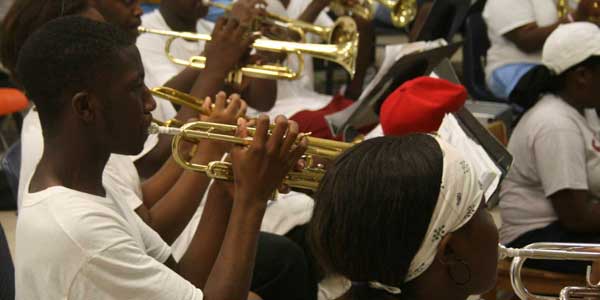 Kallen Grayson, left, plays with the Selma High School band at freshman band camp. He and other freshmen learned marching techniques and more than eight songs during the camp. All band students will attend band camp next week.

Trumpeter Kallen Grayson now has another extension of his family — the Selma High School band.

“This is basically your family because you stay here more than you stay at your house,” Grayson said.

Freshmen and section leaders for the school band practiced at least 11.5 hours daily this week, preparing students for band camp with upperclassmen next week.

Mornings begin at 5:45 a.m. Students run laps around the football field, learn formations and practice the traditional marching, which requires the lifted leg to make a 90 degree angle. At 9:30 a.m., students break into smaller groups and meet with section leaders to practice the tempo and notes of the music until noon. After a lunch break, students begin marching and playing again at 2:45 p.m. and continue until 7 p.m.

“The exercises are really not that hard, just if you try you will succeed,” Grayson said. “And, waking up in the morning isn’t really that hard if you go home and drink water and go to sleep.”

What is hard about band camp?

“If you don’t do what [section leaders] tell you to do, you’ll be running,” Grayson said.

But, Acie Munford, trumpet section leader, knows the difficulty of band camp will only increase from here.

“I warned them, but they didn’t believe me that it was going to be this tough,” Munford said.

He also feels pressure for his section to do well because it reflects upon him.

“If they don’t do it right, I get smoked for their wrongdoing,” Munford said.

Most importantly, Munford wants his peers to succeed.

“I try my best to stay strict on them because when you stay strict, they seem to improve,” Munford said. “But at the same time, I like to stay calm with them because I don’t want them to feel that they are not wanted. I want them to be close like sisters and brothers to me.”

Section leaders are junior or senior band members, chosen as the head of the musical section because they have the most experience, best performances and proven leadership skills.

Holding camp for freshmen before joining them with upperclassmen almost eliminates the learning curve of the new students.

“The upperclassmen already have a year experience over them, and to come into band camp with all of your other counterparts, and they already know a majority of the songs you don’t know, it can be very intimidating,” Williams said. “So what the first week of band camp is to prep them, literally, for what is going to happen when everyone is here.”

Both section leaders and Williams also stress the need to drink water, and only water, while at camp to stay hydrated during the hours outside.

“Water is the key to life, especially here,” Williams said.

Students in the band, flag corp, majorette team and dance team prepare all music and routines for the year during camp. Williams gives students the schedule for the entire year, including football performances, band competitions and parades, so students understand and can plan for the commitment of being in the band or on auxiliary teams.

Band camp for all students begins at 5:45 a.m. Monday.