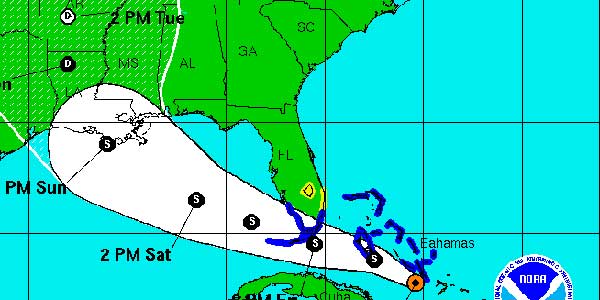 A tropical depression near the Bahamas has weather watchers alert.

Even the White House has issued a statement saying it’s on target with the storm.

Current forecasts from the National Hurricane Center shows the depression turning into a tropical cyclone with sustained winds of 39-73 mph.

The storm track sees it skirting the Florida Keys, moving up into the Gulf of Mexico and onto land at Louisiana around 2 p.m. Sunday.

The White House issued a statement mid-afternoon Thursday and said the Unified Area Command center is tracking the depression.

Rear Adm. Paul Zukunft, federal on scene coordinator, has moved some of the surplus response equipment to inland staging areas to protect the equipment and people and for the speedy resumption of oil spill recovery after the storm, according the White House statement.

In respect for a protector of democracy