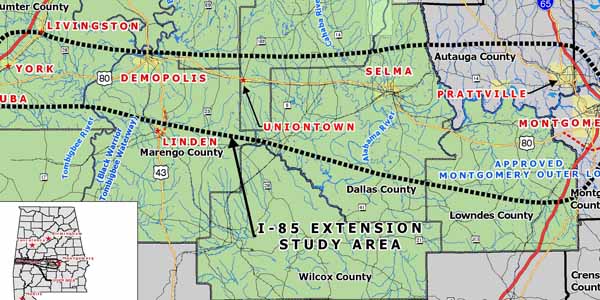 SELMA — Furrowed brows, worried looks and sighs of resignation seemed the norm rather than the exception at an open house Wednesday evening to go over prospective routes for the Interstate-85 extension.

The preferred route of the freeway would take it six or seven miles south of Selma, but directly by Craig Airfield and the South Dallas Industrial Park. Volkert & Associates Inc. designed the route and helped the Alabama Department of Transportation with an environmental study of the extension.

The I-85 extension route covers more than 126 miles to connect Montgomery, Lowndes, Dallas, Perry, Marengo and Sumter counties. Its terminus is in York at Interstate 20/59.

The preferred route begins in Montgomery, runs about seven miles south of Selma and turns north of Uniontown then drops back south of Demopolis about four miles, continues west and ends just north of Cuba at Interstate 20/59.

The route favored by many who pored over tables of aerial maps marked by all the considered routes and computer programs with more maps was the least favored by the ALDOT and Volkert. That route extends north through Autauga County, into Dallas County slightly north of Selma, then picks up at Bogue Chitto Creek and continues identical to the preferred route.

Many from Selma and Dallas County, especially small business people in Selma favored the non-preferred route toward the north closer to the city.

“They are bypassing my community,” said Helene Felton, a real estate agent with Town and Country Real Estate. “That means we’ll become another Route 66.”

Felton referred to the famous “Mother Road” built in 1926, which ran from Chicago to Los Angeles. It was taken off the U.S. Highway System in 1985 when the interstate system made Route 66 irrelevant. It since has become a scenic highway.

Felton said the open house method of walking from map to map and asking questions of Volkert employees, instead of a forum also left her disappointed in the meeting. “I was looking for a question-and-answer kind of thing. I want to know more information.”

A Volkert representative said the open house format is standard for all meetings, including those already held in York and Demopolis. Another meeting is set for Montgomery today. People who attended Wednesday night’s meeting at the Carl C. Morgan Convention Center received a questionnaire to fill out and return to Volkert by Aug. 1.

Juanda Maxwell agreed with Felton, saying she is disappointed Selma would not be in the preferred route.

“Selma could benefit from that,” she said. “We really need it. We’re larger than a lot of areas it’s going by. This is not good for Selma.”

Even some of those around the preferred route, including Old Cahawba, seemed concerned. Linda Derry, the archeologist for the site perused the map. Her finger traced the line that went below the historic site, but not far enough, she said.

Old Cahawba is the site of the first capital of Alabama. It is a favorite of many tourists. The staff at the site offer night sky watching events and a haunted tour in the fall. Noise and light pollution during construction and after will detract from the historic site’s ambience, Derry explained.

“It messes us up,” she said. “If they continue with this preferred route, we’ll have to cut out the night events because of the lights.”

David Webber, an engineer with Volkert, said the preferred route took into account the least amount of negative environmental impact along the course. He pointed to the preferred route on a map and talked about building in a flood plain versus having to go through the process of going through wetlands to the north.

For David White, a Selma homeowner, the argument of lower construction costs and less negative environmental impact didn’t wash as he studied a document handed all the participants.

White said many along the northern route would have to deal already with relocation as Alabama 22 in Valley Grande expands from two lanes to five.

Former Selma City Council member Jean Martin said this project has been ongoing for many years. “We did this five years ago. It’ll be 20 years before we see any construction.”

Representatives of Volkert said the project needs funding first — about $2.64 billion — then land acquisition would begin. If all fell into place, that would be about five to 10 years. Then the construction of the project would likely take place in phases, meaning another 15 to 25 years.

Shirley Sherrod in a file video from The Associated Press making a speech to the NAACP. She says she will... read more