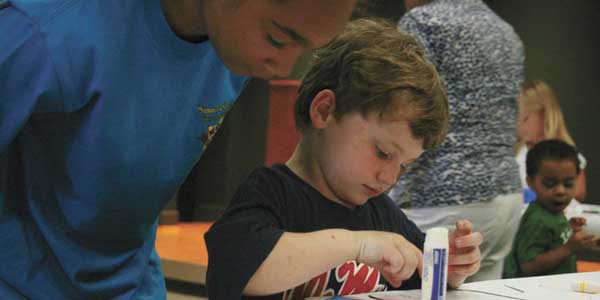 Hannah Testas, left, helps Sam Garner, right, choose items to attach to his person cut-out at the arts and crafts event, the last program of the summer, at the Selma-Dallas County Public Library on Wednesday.--Laura Fenton photo

SELMA — The walls of his bedroom will display his artistic grandeur, pieces 2-year-old Connor Owens created at the Selma-Dallas County Public Library this summer.

“He’s done bears, cats and all sorts of animals that we are going to use and frame them to put them into his room,” said his mother Holly Owens. “He really enjoys it.”

Connor drew squiggles on this latest project, a cut-out of the word “grandma,” with his favorite color, yellow.

More than 100 children visited the Selma-Dallas County Public Library on Wednesday for the last “Summer of Stars” program.

Arranging tables of five different arts and crafts projects, library Director Becky Nichols and library volunteers ushered children between stations so all participants could complete as many projects as possible before more children arrived.

“Kids loved it because I think there aren’t a lot of opportunities to look at a table of stuff and somebody says,’have at it,'” Nichols said.

All free programs were made possible by a gift from the Bess and Arthur Collias Charitable Foundation, a local private foundation.

Cayden Tabb, 7, visited  programs with his YMCA summer camp group and he already knows he wants to come back again next year.

“I got to draw and see a puppet show,” Cayden said. “This is the coolest library ever.”

SELMA — Furrowed brows, worried looks and sighs of resignation seemed the norm rather than the exception at an open... read more